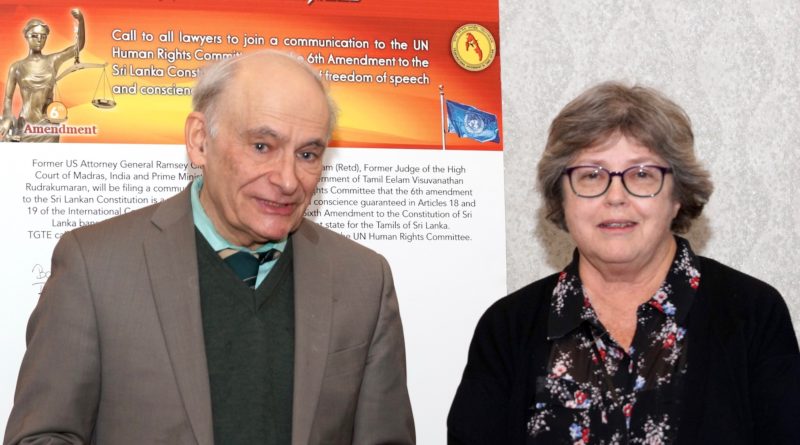 (Toronto, March 10, 2017) The freedom to express political opinions, to seek to persuade others of their merits, to seek to have them represented in Parliament, and thereafter seek Parliament to give effect to them, are all fundamental to democracy itself. These are precisely the freedoms which Article 25 (of the International Covenant of Civil and Political Rights) recognizes and guarantees; but    in respect of advocacy for the establishment of an independent Tamil State in Sri Lanka these are the very principles that are openly trampled upon by the Sinhala Constitution of Sri Lanka.

At the International Conference held on Thursday March 9th at the Delta Hotel in Toronto Dr.        Barbara Louise Jackman   a highly respected authority   in immigration and refugee law, with particular emphasis on cases involving national security, domestic and international human rights issues, torture, and  the rights and protections afforded by the Canadian Charter of Rights and Freedoms, and Canada’s responsibilities under international treaties,   described  the 6th Amendment to Sri Lanka’s constitution as a “schizophrenic clause with internal contradictions and an open  violation of  the International Covenant of Civil and Political Rights. She pointed  out that  the amendment is not limited to Sri Lankan citizens but to  “anyone” meaning that even a Canadian or British citizen  will have his/her properties in Canada or Britain confiscated by Sri Lanka if he/she espouses separation! Nothing can be more ludicrous in terms of the application of what is spelt out in this Amendment.    She further   commented that Sri Lanka’s constitution refers to “people” indicating probably one (Sinhala?) ethnic group whereas it is a country with different “peoples” in respect to its ethnic diversity who are discounted according to the 1978 constitution.  Dr. Jackman who  has been awarded honorary Doctor of Laws degrees by the Law Society of Upper Canada   and by two other leading Universities in Ontario  was the Keynote Speaker at this Conference largely attended by Canadian Tamils lawyers, academics and professionals.

Professor Matas who received his Law degrees from the University of Oxford was the second Plenary Speaker at the Conference. He served as a Law Clerk to the Chief Justice Supreme Court of Canada in 1968-69,  and was special assistant to the Solicitor General of Canada in 1971-72. He served as a member of the Canadian delegation to the United Nations General Assembly, the Task Force on Immigration Practices & Procedures, the Canadian delegation to the United Nations Conference on an International Criminal Court 1998, the Canadian Delegation to the Stockholm International Forum on the Holocaust  and from 1997 until 2003.

He illustrated that Sri Lanka has been tinkering with its constitution more than any other country in South Asia   and the 6th Amendment is a clear violation by Sri Lanka of its obligations in international law under the Covenant to  which it was a signatory.  It is to be emphasized that while the 6th Amendment criminalizes advocacy for independent state in Sri Lanka, calling for the repeal of the 6th Amendment is not prohibited by this law.

The Sixth Amendment to the Sri Lankan Constitution criminalizes peaceful advocacy for an independent state. In highlighting this fact, the former U.S. Attorney General, Mr. Ramsey Clark together with  Justice K.P. Sivasubramaniam, a former Judge of the High Court of Madras (India) , and  Hon. Rudrakumaran Viswanathan, New York based Lawyer and the Prime Minister of the Transnational Government of Tamil Eelam,  signed a communication to be filed with the UN Human Rights Committee with respect to the Sixth Amendment.

This conference was organized  with the view  to gather all  progressive legal luminaries and practicing lawyers from across the globe to lend their support and provide legal representation  to the United Nations indicating that the   Sixth Amendment to the Sri Lankan Constitution criminalizes peaceful advocacy for an independent state, by its people, and that we hold the strong view that this amendment is a violation of freedom of thought and conscience and freedom of speech guaranteed to citizens in the International Covenant on Civil and Political Rights, in sections 18 and 19.

The Transnational Government of Tamil Eelam (TGTE) starting on October 24th, coinciding with this year’s UN day,  had already appealed to    all lawyers from the homeland, the Tamil Diaspora, Global Tamils, and all progressive lawyers across the globe to lend their support and provide legal representation in the communication to be filed by the TGTE with the UN Human Rights Committee with respect to the 6th Amendment to the Sri Lankan Constitution. Attorney and human rights activist, Professor David Matas    is coordinating this effort.

It is also expected that the TGTE will be citing several internationally well known cases and argue with the UN that the 6th Amendment to the Sri Lankan Constitution criminalizes peaceful advocacy for an independent state and that it is a violation of freedom of conscience and freedom of speech guaranteed in the international covenant on civil and political rights.

The cases in point are as follows:

2) In the case of Erdoğdu and Incev.Turkey also July 8, 1999, the Court held that convictions for disseminating propaganda against the indivisibility of the state violated the guarantee of freedom of expression in the Convention.

3) The Court, in the case of Association Ekin v. France held on July 17, 2001 that the banning of a book advocating Basque separatism violated the guarantee of freedom of expression in the Convention.

4) In the case of IsakTepe v. Turkey the Court on October 21, 2008 held that a charge without a conviction for disseminating separatist propaganda violated the guarantee of freedom of expression in the Convention.

The present call by the TGTE to Lawyers across the globe is reminiscent of the 1976 Trial-at-Bar proceedings against the Tamil leaders for distributing to the public copies of the Vaddukoddai Resolution. A record of 67 lawyers represented the Tamil leaders then, including such unparalleled Tamil legal luminaries late S.J.V. Chelvanayagam QC, Late G.G. Ponnampalam QC, and late M. Thiruchelvam QC.

It  is good to recall here  that Mr. Paul Paul Sieghart  in his report entitled,  Sri Lanka-A Mounting Tragedy of Errors – Report of a Mission to Sri Lanka in January 1984 on behalf of the International Commission of Jurists and its British Section commented that “the President Jayawardene can now hardly be surprised if his opponents, both within the country and outside, regard the 6th Amendment as nothing more than a piece of political chicanery, designed to move Sri Lanka even further towards a one party State…”

Before the 6th Amendment was passed, the Tamil United Liberation Front was the largest opposition party in Parliament and with one stroke of the pen the  infamous   Sinhala President Jayawardene passed on the Tamil representation to the armed Tamil youth in August 1983.

The TGTE will also set up a website in which interested lawyers will be able to log their names, affiliation, and their country of residence in order to express their interest in joining this call for legal representation. Eelam Tamils are called upon to campaign for legal personnel in the homeland as well as around the world, Tamils and non-Tamils alike, to sign up with this timely project.

One thought on “Sixth Amendment to Sri Lanka’s Constitution: Contradictory, Incoherent and Unconstitutional”